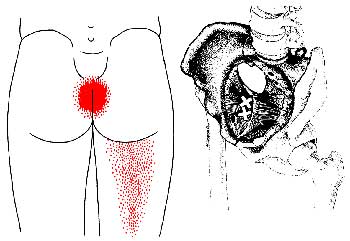 A 38 year-old female sought treatment for coccyx pain thought to be due to severe arthritis after total hip joint replacement surgery. Prior to surgery, she had been diagnosed with a leg length inequality and her surgeon had used a longer implant to equalize length on the short side. The surgery was successful, but she continued to have burning pain in the coccyx while sitting at work. .

The coccyx, also known as the tailbone, is most often damaged in falls. In this case there had been no fall. Our postural analysis revealed that a leg length inequality was still present even after surgical outcome was deemed successful.  We also found the iliopsoas muscles to be inhibited and weak. We surmised that this leg inequality was most likely functional (muscle imbalance) as opposed to structural (bone length). Consequently, treatment planning had to be inclusive of muscles on both the surgical and the non-surgical hip. We reviewed seated posture, and discussed discontinuing use of the “doughnut” cushion which could be causing compression on the gluteus maximus (causing trigger points to form). Muscle testing found weak gluteal muscles, and especially the external rotators.

Treatment targeted trigger points in muscles of the lumbo-pelvic region that might reproduce pain in the coccyx. A key moment to solving this case was in finding a trigger point located in the most medial / inferior portion of the gluteus maximus, close to its attachment on the coccyx. Pressure on this attachment site reproduced the burning pain in her coccyx. Quadratus lumborum, the lumbar multifidi, TFL and adductors were all treated bilaterally due to their functional relationship to the pelvis.

The patient was recommended to only sit 15-20 minutes at a time and to perform selfetches to hip flexors and extensors throughout the day. She was instructed in self-trigger point compression around the coccyx. After six treatments she was pain-free and the leg length measured equally. She was encouraged to begin a maintenance program with a functional strength trainer due to her young age for hip replacement surgery.