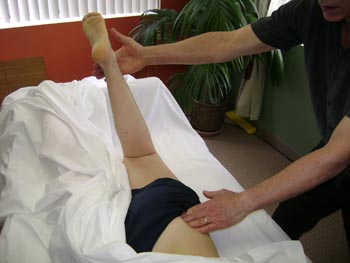 A 50-year old, competitive tennis player presented with limited mobility in the left hip. She described three surgeries to the right knee including a partial replacement. Her main reason for seeking treatment was a constant feeling of a “tight band” around the left hip and pain after prolonged activity. She was concerned that she had overused her left hip initially when playing tennis before surgery, and later while recuperating and using crutches.

Postural analysis indicated an increased anterior pelvic tilt on the left side. She was observed to limp slightly and favor the left leg. Palpation revealed increased muscle density and trigger points in the five adductors, the hip flexors, tensor fascia latae, and the gluteal muscles.

Neuromuscular treatments were coordinated with physical therapy and athletic training. Initially, treatments focused on decreasing the muscle density and trigger points of the adductors and hip flexors. The client noticed changes after the first session.  Next, quadriceps, hamstrings, gluteal, and deep lateral rotator muscles were treated.

After three months of weekly treatments she was back to her regular practice and game schedule. The combination of neuromuscular therapy, physical therapy, and activity specific strengthening exercises allowed the client to recover faster and stronger than conventional rehabilitation alone. Treatment continues on an ‘as needed’ basis for maintenance.