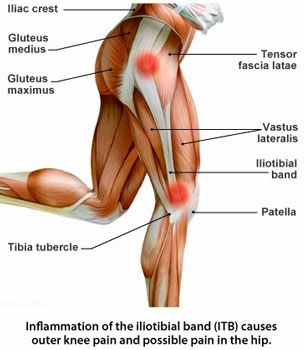 The knee separates and connects the two longest bones in the body. Because most of the body’s weight bears down on these bones, it is vital to keep the knee happy. We often tell clients that the knee doesn’t have a brain. It is told where to be and what to do by mess-ages coming down from the hip and up from the foot. Many structures help stabilize this inherently unstable stacking of bones, including the iliotibial band.

The iliotibial band runs down the lateral thigh and stabilizes the knee by preventing unwanted adduction. This band is a thickening of the fascia lata that envelops the whole of the thigh, like a stocking. The ITB could be considered the tendon of two muscles; the tensor fascia lata (TFL) in the front, and the gluteus maximus at the rear. Both act as the upper tensioning and positioning ‘brains’ of the knee. The lower ITB attachments are complex. Some fibers split to attach to the lateral femoral condyle (Kaplan’s fibers) and may merge into the patella, some can attach to the head of the fibula. Most attach to the tibia (Gerdy’s tubercle). Underneath is a richly innervated and vascularized layer of fat and connective tissue (instead of the traditional bursa). In ITB friction syndrome (ITBFS), the lateral femoral condyle is where the point tenderness occu=rs. We see this often in runners and cyclists.

Andry Vleeming, editor of the classic text ‘Movement, Stability and Lumbopelvic Pain,’ likens the body’s action of shifting the weight onto one leg when walking or running to ‘pole dancing’. As your weight transfers laterally you press the contents of your thigh against the rigid ‘pole’ of the ITB. Runners often have weak hip abductors causing the opposite hip to drop (not rise) when in the stance phase. This varus-like (bowing) effect creates extra compressive and shear forces on structures pushing into the distal ITB attachments leading to tissue damage, swelling , inflammation and pain.

Bear in mind you can have both top-down and bottom-up influences on the ITB. Poor rear foot mechanics and hyper-pronation can cause to excessive internal rotation of the tibia. This mal-position means that the distal ITB attachment ends up with more medial rotation, once again leading to more compression and shear forces as the structures underneath push into it. Running on cambers or circular tracks exacerbates this.

You Can’t Stretch A Pole

The ITB cannot be stretched. Foam rolling, while beneficial, mostly affects vastus lateralis, the powerful quadriceps muscle that lies under the ITB (another structure that pushes out against the iliotibial ‘pole’ when bearing weight). Before considering an invasive procedure for ITBFS, we recommend: improve top-down and bottom-up biomechanics, reduce trigger points within and stretch the two proximal muscles (TFL and gluteus maximus), strengthen hip lateral rotators and abductors, and correct any aberrant foot mechanics.