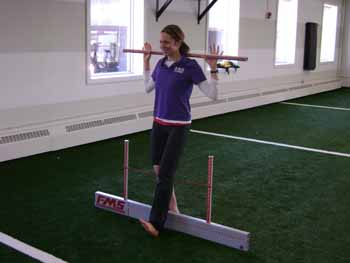 A 44 year-old woman was referred to 360 NMT by her neurologist for multi-site symptoms that including pain, weakness, tingling, and numbness. The source of her symptoms was difficult to pinpoint. The primary area of complaint was in the trapezius area (top of the shoulders), with symptoms spreading down both arms. Major neurological testing was negative. She described being increasingly unable to perform activities of daily living especially the care of her two children. She had tried to complete a specific, hospital-based, ‘back pain boot camp’ program, but she dropped out due to adverse reactions to the exercises. She had become afraid to move.

360 NMT attempted a postural assessment, but results were inconclusive due to widespread hypermobility. Her muscles palpated as loose, amorphous and flaccid. We recommended that she see a physical therapist for functional movement screening and combined treatment planning before starting NMT.

Initial hands-on therapy was gentle with the goal to reduce pain. Positional release and muscle energy techniques were utilized for the trapezius, levator scapulae, serratus posterior superior, posterior cervical extensors, and scalene muscles. Next, a more stimulating series of nervous system distraction techniques via cutaneous super-stimulation were applied for body awareness. Gradually, small muscle activation movements were re-introduced. Once the kinesiophobia (fear of movement) was gone, she worked with a PT 2x/week for overall strengthening.

Widespread muscle deconditioning and pain was overcome with a combination of PT and NMT. The patient was very diligent with her homecare exercises, so gains were made quickly and seemed to hold. She resumed some daily activities that she previously thought were no longer possible. She will need to maintain an ongoing therapeutic strengthening program because of her hypermobility.

<-Back to Other Issues