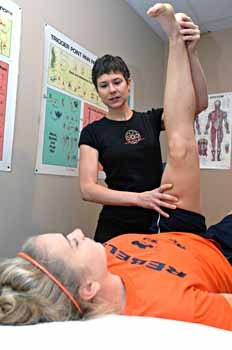 A 24 year-old squash player had developed pain superior to, and under, both of her kneecaps and had been diagnosed with PFS. Within a three-year period of pain she had had a total of nine months Physical Therapy. She still described episodic, grinding pain with movement that was worse with the stop-start movements of squash and also when wearing high heels. Despite the pain she continued to run 2-3 miles at a time, use the elliptical machine, practice yoga and lift free-weights. She came to 360 NMT when the knee started to ache even without movement.

Observation and palpation assessment revealed bilateral bow legs, more on the right than the left. The left arch of the foot was flattened, so a Navicular Drop Test was performed confirming hyper-pronation on weight-bearing. The prone bent leg fallout test (for the extensors and external rotators of the hip) revealed hypermobility. Strengthening these muscles was recommended.

This is a new and ongoing case. We will retest to monitor progress of rehabilitation of her left arch and posterior hip, while continuing to treat muscles that can contribute PFS pain.