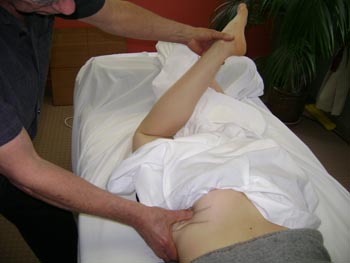 A 38 year-old female slipped and fell on ice. She came to 360 NMT two months later with persistent pain in her lower back and the right side of her buttocks that referred down to the posterior thigh. Additionally she experienced intra-pelvic pain during intercourse (dyspareunia), for which her gynecologist prescribed numbing cream.

Piriformis syndrome can have many different symptoms, some of which may be driven from neurological (radiculopathy), soft-tissue entrapment (of the sciatic nerve by the piriformis muscle) or trigger points in the muscle itself. A nerve block usually rules out radiculopathy. NMT is indicated for trigger points and can also help relieve nerve entrapments.

The piriformis muscle is both an external hip rotator and sacral stabilizer. One of many of tests performed was the prone-bent-leg-fallout which revealed tightness in the external hip rotators. Trauma to her sacriallic joint, followed by sitting all day, may have caused compression, ischemia and trigger point formation in the gluteal region. Treating myofascial trigger points in the piriformis recreated her symptoms in the posterior thigh and pelvis.

After two sessions, the intra-pelvic pain was resolved. Additional treatment to other deep lateral rotators further reduced low back symptoms. The patient was referred to a chiropractor for sacral adjustment, which also helped reduce the posterior thigh pain. Active isolated stretching was recommended to improve hip flexibility. After eight treatments, she was pain-free.