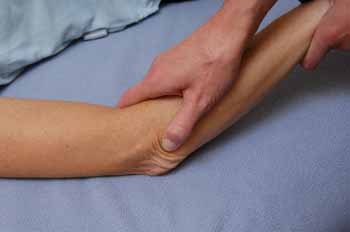 A 40 year old writer and violinist with history of Repetitive Strain Injury (RSI) presented at 360 NMT for treatment of her left arm and shoulder. In the past, overuse of her forearms and resulting pain had forced her to use voice recognition software and stop driving. She was able to slowly recover by receiving manual therapy, learning the Alexander technique for postural correction, Tai Chi for movement, and improving her diet. It took years to return to function, but she was able to play violin again. When she recently increased her playing time in an orchestra, she started having pain radiating down her left arm on the pinky side. As she played her instrument, she actually would lose the ability to use her pinky up to tempo.

On examination, an ‘S’ shaped curve in her thoracic spine was observed. Her left shoulder was elevated, and both shoulder blades were winged. The serratus anterior and the rhomboids are designed to stabilize the scapula with a “sling-like” connection between the spine and the ribs. When deconditioned, these muscles compromise all arm movements. They needed treatment to stimulate them for movement re-education. We also considered the violin playing position: the left arm is holidng abduction, external rotation and supination. All the muscles that perform these actions needed to be addressed as well.

Trigger points abound in muscles that are misused. Most shoulder muscles have predominantly fast twitch fibers. That means that they like to work, then rest. String musicians often perform using prolonged, repetitive, sub-maximal contractions that can lead to muscle damage and trigger point formation. In the case of this violinist, trigger points were pain culptrits in many muscles. The pectoralis minor, latissimus, serratus anterior and serratus posterior superior all had strong referral patterns that mimicked symptoms into the pinky side of her hand. Latent trigger points were found in the trapezius, the rotator cuff, rhomboids, deltoid, biceps and brachioradialis.

360 NMT strives to identify, modify or remove perpetuating factors. In this RSI case, we treated the scapula by first removing the trigger points, then recommended appropriate homecare activity to activate the mid-back. Subsequent treatments focused on the dexterity muscles of the forearm, especially the extensors and supinator. She continues to play regularly but requires regular monthly neuromuscular therapy for maintenance.

<-Back to Other Issues