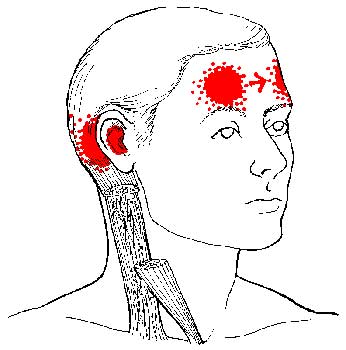 A 58 year-old dentist fell while waterskiing, landing heavily on the right side of his head. He subsequently developed bilateral tinnitus. CAT scans, cerebral angiogram and X-rays performed at Massachusetts General Hospital’s ENT department were all found to be normal. He had trouble sleeping because the ringing seemed louder at night. He was put on anxiety medication after three sleep studies came back normal. A course of multi-factorial therapies was prescribed, including pharmacology, P-Stim, Chiropractic and Acupuncture. He came to 360 NMT to address any possible soft-tissue contributions to his tinnitus.

Tinnitus is a persistent ringing in the ears commonly associated with sleep and cognitive disturbances. He described his symptoms as a pulsatile high-pitched shrill noise that at worst was 8/10 and at best 5/10. He had no hearing loss. As a dentist he sat on the left, therefore he was habitually rotating his upper body and head to the right. We suspected that this might be a perpetuating factor.

Tinnitus is difficult to treat. There are published studies that report specific head and neck muscles contributing to tinnitus, the most common of which are trapezius, infraspinatus, splenius capitis, semispinalis capitis, sternocleidomastoid, middle scalenes, masseter (especially the deep head) and temporalis. A tinnitus expert and 360 NMT collaborator, Dr. William Teachey, has corresponded that 50% of sufferers will get no response to soft-tissue interventions, 25% will respond very well, and 25% will realize some benefits to soft-tissue treatment. We treated all of the aforementioned muscles.

During some treatments, we were able to reduce the patient’s symptoms to a 2/10. He described anything under a 6/10 “livable.” Results were best when combined with trigger point injections from his Otolaryngic physician. He experiences the most relief when performing isometric contractions of his neck muscles. This indicates a soft-tissue component still driving the tinnitus. He continues to receive treatment to maintain these results.