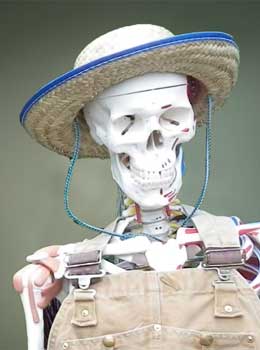 Hans is originally from Germany. He immigrated to the U.S. and is currently working as the 360 NMT Clinical Skeleton.

Hans loves to show off his bony landmarks during seminars. He’s had his jaw broken three times, and underwent surgery after falling off his perch. Despite this, he still has a continual smile on his face and very good teeth.

Hans has a minor obsession for the work of Dr. Temperance Brennan (star of the TV show “Bones”) and he listens to Wagnerian opera.

In his spare time, he loves to frolic outside and celebrate holidays. Pictures of his adventures can be seen in his very own photo album on the 360 NMT Facebook page.