“amazing, what you don’t do because you are afraid” 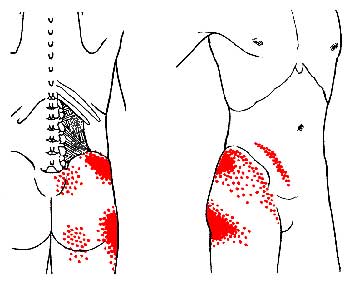 Seven weeks after a right-sided Total Hip Joint Replacement (THJR), a 51 year-old female patient was referred for neuromuscular therapy by her physical therapist. She presented with hamstring pain that increased with walking. She was afraid to continue with PT exercises until the hamstring pain resolved.

This patient had previously been diagnosed with Right Congenital Hip Dysplasia which became symptomatic after giving birth to her second child. In 2007, she underwent a right hip resurfacing procedure for a labrum tear. She was symptom-free for five years. In 2012, metallosis (a build-up of cobalt and chromium ions in the soft tissue of the body) was discovered due to metal-on-metal in the resurfaced hip. Consequently, she was underwent the THJR.

Post-op leg length inequalities can result from total hip joint replacements. The physical therapist found a discrepancy and put a ¼ in lift in the left heel to equalize hip height. However, this did not resolve the hamstring symptoms. While evaluating the patient’s performance of prone hip extension we observed an incorrect muscle activation pattern. Her right hamstring fired long before the gluteus maximus and contralateral paraspinals when she lifted her straight leg toward the ceiling, indicating that her hamstring may be overworking in compensation for a weakened right hip.

Cross fiber friction was used at the upper hamstring attachment on the pelvis. We employed a “muscle play” technique to release adhesions between the hamstrings and the overlying gluteus maximus tissue. After separating the hamstring from the gluteal muscle, the patient was taught to perform the extension exercise correctly by activating her gluteal muscles.

360 NMT was able to resolve the hamstring symptoms quickly. The movement dysfunction was caught very early, so a pattern did not have the opportunity to establish itself. The patient was able to return confidently to her post-surgical rehabilitation. She was able to walk without pain.