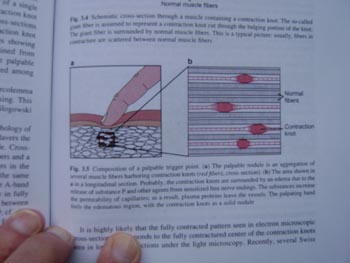 A seventeen year-old high school junior basketball player presented with right scapular dyskinesis (dysfunctional scapular positioning, especially during movement). He’d had two surgeries including a posterior labral repair and capsular tightening. He was referred to 360 NMT by his shoulder surgeon after three courses of physical therapy provided only moderate relief. Other interventions included cortisone injections, anti-inflammatories and wearing a sling. X-rays and MRI of the shoulder showed no abnormalities. He complained of pain and tenderness around the scapula when reaching overhead as well as a persistent pain at the shoulder joint (with or without activity). He could not stand up fully without pain, and he fidgeted constantly to try to find a position of relief.

Postural assessment confirmed faulty shoulder movement patterns, reduced extensibility of latissiums and teres major muscles, as well as a winged scapula. We observed atrophy of the right biceps brachii and peri-scapular muscles. He understandably was frustrated because he was not able to pinpoint what activities were exacerbating his problem. He kept trying to shoot baskets and workout through the pain. 360 NMT referred him to a Physiatrist for management of the myofascial pain. A combination of trigger point injections and medication (gabapentin) combined with NMT treatment commenced.

Our initial goal was to deactivate trigger points and empower him with knowledge about myofascial pain. It was critical that he understand that he had developed central sensitization. Patience was the key during this initial phase of therapy. The infraspinatus muscle of the rotator cuff reproduced most of his shoulder pain. Active trigger points in the scalene muscles referred directly into the intra-scapula region. Trigger point deactivation for latissimus dorsi and deltoid also assisted to reduce pain. Erector spinae were treated bilaterally. Levator scapula treatment quelled involuntary spasticity of the region.

Once his pain-pressure threshold increased and his muscles could tolerate more pressure and activity, physical therapy was reintroduced for core strengthening, postural correction and dynamic shoulder stabilization

After cumulative NMT treatment, the patient was able to stand up without pain and his shoulder symptoms reduced markedly. This case demonstrates how a combination of Physiatry, Physical Therapy and Neuromuscular Therapy can reduce myofascial sensitization related to shoulder instability even after multiple surgeries.

<-Back to Pain Syndromes