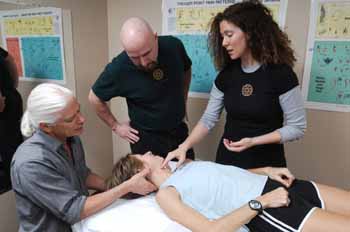 An overworked computer data processor presented with left shoulder pain that radiated down her lateral arm and into her wrist. She described a “heaviness and stiffness” with tingling into the first three fingers, especially in the morning. Pain was worse with activities involving sustained forearm flexion: typing, holding a newspaper, cooking, driving and grooming.

Positive changes were made when freeing up the pathway of the median nerve in its relationship to the two heads of pronator teres where it exits the muscle a third of the way down the forearm. Sustained shearing pressure, lateral rolling, and pin and stretch techniques were followed by gentle rhythmic pronation / supination movements with compression. The ability of the nerve to move freely was reinforced by gentle repeated stretches of pronator teres.

Three NMT treatments made significant improvements. Once the forearm muscles became more extensible, tingling symptoms from the soft-tissue entrapment of the median nerve improved. Improvements to her ergonomics and fewer prolonged, fixed postural positioning were emphasized. It was suggested that she break up her workday activities with movements such as the “Wall Angel” sequence for the shoulder, as found on the 360 NMT blog.